My Badge of Honor 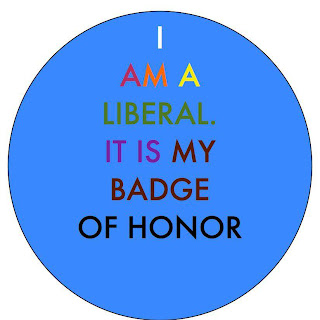 I am a Liberal.  It is my badge of honor.
Posted by Life is more than sound bites at 8:45 PM No comments:

"I've been on welfare and food stamps. Anybody help me out?  No!"  These words were yelled out by actor Craig T. Nelson on Fox.  Gawd, like a typical moronic Republican, he doesn't have a clue. And even though he's made money as an actor, he apparently hasn't earned enough to buy some brains!

Ann Romney is continuing her whining ways.  She wants fellow Republicans who are backing away from Mitt's mouthings, to just "Stop it. This is hard."  Yes, Ann, it is so hard to be you. You people just don't know how hard this is: traveling, meeting people who actually have to WORK for a living, stopping in, ugh, diners and such, always having to smile.  And people always saying such mean things about Mitt.  Leave him alone. Just be grateful that he's running.   Well, gawd, Ann, if you can't take it now, get the hell out of the race. And take you lying, flip-flopping husband with you.

So, the tax return for 2011 is being released.  I have no doubt that it took this long to doctor the information.  After all, he knew he was going to be running for President and knew he had to hide stuff.

The other 20 years of tax returns come to us in the form of a letter from the accountant who has "seen" them?  Really?  No specifics given out.  Romney has said that giving specifics would give ammunition to the Democrats.  Well...... if you have nothing to hide.......

And about the Cayman Islands, Bermuda and Swiss accounts?  Nada.  Romney:  a true American patriot....keeping his money overseas.  What a guy!

Doctors reports on Romney's and Ryan's physical health will be coming out.  I'd like to see the mental health reports!

Mitt thinks if his dad, who was born in Mexico, was born to Mexican parents, he'd have a better shot at winning over Latinos.  Really?????  Mitt, even that wouldn't help you.

By the way, if you don't have an approved voter ID, go get a gun permit.  That will get you into the voting booths.  You don't even have to show your gun, or actually own one!!!!  Getting a gun permit is easier than going through the hoops those f**** states require you to go through just to exercise YOUR RIGHT to vote!

The only reason I look forward to reading about Mittens is to see what other slithering, lying crap comes dribbling out of his flip-flopping mouth.  Each day makes the hole a little deeper.  Heh, heh, heh.
Posted by Life is more than sound bites at 2:30 PM No comments:

Thirty-eight years ago today, I gave birth to our second son, Abbott.  It was one of the most amazing, happy days of our lives.  And each year, on September 11th,  we celebrated that wonderful moment...... until 9/11/2001.  On that day we all felt the horror.  Our son was 2500 miles away from us and the telephone conversation we had that day was difficult.  He said to us, "How can I ever think of this day with anything but sadness?"  We said all the appropriate things to him, trying to tell him of our happiness the day he was born.  But it was a conversation that left all of us with a heavy heart.

Each year after that it became less difficult.  Then one September 11th, I told him that there were 2 ways one could think of this day:  Everyone was calling the event, nine-eleven (9/11).  That seemed to be etched into the public mind about the day of the tragedy.  But we should refer to his birthday as having been born on the 11th of September.  That differentiation didn't have the same impact or connotation as 9/11.  And once we started referring to his birthday that way, it became an easy way to separate the two events.

We will never forget the tragedy of that day in 2001, but we celebrate the joy of Abbott's birth, first and foremost.

Happy birthday, my darling son.
Posted by Life is more than sound bites at 11:01 AM No comments: