I am SICK AND TIRED of being asked to log in with FaceBook or Twitter or other such sites in order to follow other blogs or make a comment on an article or continue reading some particular site.  SICK, SICK, SICK of it.  Each one wants to access my friends list and be able to otherwise manipulate my sites.  Who the hell do they think they are!  I'm done with that!

Instead I'll sound off on my blogs (this one and on Wordpress) and NAME NAMES!  Pissed, I tell you.  Just pissed!
Posted by Life is more than sound bites at 4:30 PM No comments:

Email ThisBlogThis!Share to TwitterShare to FacebookShare to Pinterest
Labels: pissed

So, thirty years ago today, Apple ran the first commercial introducing the Macintosh computer.  In 1987, I was introduced to the world of computers at the radio station where I worked.  I sat down and faced a Macintosh.  It didn't take long to get the hang of it and every day I learned another trick it could do.

When I decided to buy my own 'home' computer, I found very few programs that were written for the Mac and everyone told me to get that PC thing because I'd get more use out of it.  So I did.  For the next 17 years I struggled with that thing at home and in my husband's law office where I also worked.  It was great when it worked but those dreaded blue screens and warning screens, and screens that froze drove me crazy.  I had a "fix-it" guy on speed dial.  I offered to get a cot for him to sleep on in our office and promised to feed him if he'd just stay around.  It was inevitable that one or more out of the seven computers in the office would require his attention more than once a week.

When we finally decided to close the office and move out west to be close to our sons, we knew we needed a computer to take across country with us to keep up with ongoing business.  Both sons asked us to go to the Apple store (which was 50 miles away) and play with the laptops.  I did, twice and I ended up buying my first MacBook Pro.  I have never looked back.

I'm on my second one and love everything about it.  I've never had any trouble with it.  When I have questions I go to the Genius Bar and get them all answered.  I've had individual lessons on how to do things with it.  I use all the tutorials to find things out.  I love my iPhone and iPod and iPad.

I bought my husband an iMac and he has a PC for specific programs that were never written for a Mac.  When he has a PC problem and asks me to fix it (it happens often) I cringe, mutter under my breath, try not to gag, and hope that whatever I click on will clear it up.  Doesn't always work and when it doesn't I just throw up my hands and tell him to dump the PC.  His Mac doesn't give him any problems, just the PC.

I am an unabashed Apple products lover, period!  So, happy birthday (sort of) Macintosh.  You are my favorite toys!

Posted by Life is more than sound bites at 11:27 AM No comments:

Arizona State University has a problem with one of its fraternities, Tau Kappa Epsilon.  The ASU chapter held a party off campus on Martin Luther King Day but among the things that upset many people was the fact that the partygoers wore hip-hop clothing, used cups made from watermelon that had been scooped out and photos were posted to social media.

The issue has become one about the First Amendment.  Many in the community want the students who attended the party and whose actions they think were racist thrown out of school.  Others think expelling them would be going a bit too far for participating in what's being termed as an offensive activity where students were just being stupid.  A lot of the intense feelings against this fraternity, known as TKE, is the result of their history on this campus.  In November of 2012, TKE members were involved in a fight with a member of a different fraternity who was an African-American.  That individual was beaten and ended up with a concussion and broken nose.  TKE was already on university probation at the time this party took place.

The African-American community wants them punished.  The question is, do the students have a right to dress the way they did and do the stupid things they did?  What's the penalty for being unbelievably stupid and racist?

Frankly, college fraternity students have never enjoyed a reputation that clearly marks them as having an abundance of good sense.  While I personally think their actions were reprehensible, expulsion of the students involved isn't called for.

I think the Tau Kappa Epsilon national office should yank the ASU chapter's charter.  That saves the university the trouble of kicking the fraternity off campus.  It's time for ASU to cut their losses when it comes to a "rogue" fraternity like TKE.  In addition, perhaps it's time for ASU to convene a campus-wide discussion on the absurdity, stupidity and despicable nature of the kind of behavior that has aroused the ire of so many people and increased racial tensions in the community.

And perhaps it's time for university students to understand how hurtful their actions can be and how those actions will haunt them throughout their lives, courtesy of the Internet.  Potential employers won't look on those actions as particularly beneficial when it comes to hiring.  And finally, I'd like to see the university take some disciplinary action against all those who were part of this sickening story, enough disciplinary action to make those kids fear that if they step out of line again, there will be no guarantee of an ASU diploma in their future.

Fraternities and sororities should and can be a good influence on young minds.  They do perform a lot of good deeds by participating in social action causes and foster a sense of community for young college students.  But absurd and hateful pranks should not be part of the culture as it seems it was at ASU's TKE chapter.  It's time for them to pack it in.
Posted by Life is more than sound bites at 2:20 PM No comments:

I think I found the way that readers of my blog can comment without having to go through an email.  At the end of each blog it says "posted by....... "and at what time.  Then there should be the word "comments".  It may say no comments or # comments.  If you click on the word comment, there will be a underscore and that will take you to another screen with that particular blog only and a box below it to post a comment.

Okay, everyone, try it and see if it works.  I'm still trying to see if there is another, easier way to do this but, at least, this should work.  The operative word here is "should."  Leave a comment so I can see if it works.

I've been blogging here on Blogspot for a while now and find it to be enjoyable, interesting, cathartic and a good place to "pen" my thoughts when the urge strikes.  The one thing I don't think I have is many people who follow me or read what I write.  I'm not very good at getting traffic here and I can't seem to get people who do read my blog posts to comment on them.  Some let me know in other ways but I would prefer that they leave a comment here.

I have some friends who write their blogs on Wordpress so I went to that site to check it out.  I created a blog there with the same name as this one but I think I created it too quickly without checking out what it was offering.  So, I've written four posts and each is automatically posted on my Twitter account.  The free site doesn't offer much in the way of design, font selection, colors, set-up or ease.  I was able to apply one of my own photos at the top but that was pretty much the only thing I could do to make it my own.  However, for a price they offer several options............ most of which are offered free here at Blogspot.

So, since my mom did NOT give birth to a complete idiot, I think I'll be sticking with Blogspot and writing here most often.  Maybe once in a while I'll return to Wordpress........ or I might just delete that blog altogether.  Don't know yet.

But, if you're reading this please make a comment at the bottom.  Look people, do I have to beg????? Here's a lovely bouquet.  Will that help? 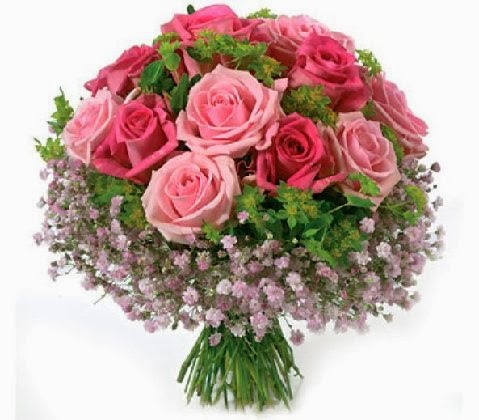 Posted by Life is more than sound bites at 4:42 PM 1 comment: