She Walks with the Spirit...She Reaches the People

When I had my radio talk show in Connecticut, I had the distinct privilege of having Retha Walden Gambaro as a guest on my show.  She had come to New London to display her sculptures "Attitudes of Prayer" at the Ya-Ta-Hey Gallery.  I realized during our conversation that I was sharing airtime with an incredibly special woman.  We became friends as a result and Warren and I were graciously invited to spend a weekend at Retha and Steven's home in Stafford, Virginia.  On the Saturday of that weekend, Retha and I sat down in her living room and she proceeded to tell me her life story which she asked me to record.

She walks with the Spirit….She reaches the People

As we settled into the luxury of overstuffed couches to begin our interview, I marveled at the grace and beauty of the woman seated near me.  At the tender age of 85, Retha Walden Gambaro exuded not only the strength of her ancestors, but a love for all that surrounds her.

Retha Walden Gambaro, born of a Creek Indian mother, is a sculptress who has captured the essence of Spirituality in an amazing 38 piece exhibit she calls “Attitudes of Prayer.”   As a child, Retha says, she loved to touch things and remembers receiving lifelong spiritual messages from the touching.  As a grandmother and great grandmother, she wanted to pass on to the children in the family the spiritual messages that come with prayer.

After her last child left home, Retha decided it was time to do something for her.  She bought canvas, paints and brushes and, nothing happened.  Her husband, Steve, kindly suggested that perhaps she should trash the canvas.    Minutes later, a phone call from her friend, Lois, changed the course of her life.

Lois insisted that Retha was a sculptor because she had seen a big green cheese frog Retha had fashioned for a party.  The two bought 25 pounds of clay and Retha started working with it.  As she saw something emerging from the clay, it was as if she wasn’t doing it.  She was overcome by emotion, the tears streaming down her face and she realized she had a gift.  She says many times when she is truly inspired and doing something that comes from deep within her, it’s as though she is receiving a gift instead of giving something.

Retha didn’t begin any formal lessons until another friend, Elizabeth, encouraged her.  She had done 3 or 4 small sculptures in clay.  Elizabeth saw a bust Retha had done and sent her a note with a check to cover a six week summer course at the Corcoran School of Art in Washington D.C.   Elizabeth’s note ended with “G-d has given you a gift and this money is just to help you polish it.”   Retha was 52 years old.  But, she says, she’s been in training most of her life without really realizing it; by the way she observed life around her.

She went to the Corcoran and was taught by Berthold Schmutzhart.  After the six weeks, he called Retha out into the hall and told her, “I don’t give A+’s, but my wife and I have been talking about you and we feel that G-d has given you a gift and we want you to share our studio for a year to polish that gift.”  He knew nothing of Elizabeth’s note.   At the end of that year, Retha and Steve bought a studio and her career as a sculptress began.

“Attitudes of Prayer” was an idea born of the need to help children learn that praying is something that can be done anywhere, anytime because it can be done silently and children should be encouraged to do that.  She began with small simple things that children could come and help her sand.  They would talk about the sculpture and she would help them realize that the sculpture was a prayer.

Retha recalled that as she and her grandmother, whom she idolized, walked under the cottonwood trees and along the Salt River in Arizona, she never heard her pray out loud, but somehow, Retha knew she was praying.  Retha finds sacredness in the silence and peace that comes from within one’s heart.

The 38 sculptures range from 8” high to over six feet tall, with names like: ‘Gratitude’, ‘Prayer for Deliverance’, ‘Exultation’, ‘Child’s Prayer’, ‘First Prayer’, ‘Meditation’, ‘Unity’, Supplication’, ‘ Warrior’s Prayer’, ‘Acceptance’, ‘Mourning’, and ‘Peace.’  They were created, not as an example of any organized religious group, but as a universal spiritual feeling that many people experience without words.

“Attitudes Of Prayer” is the central theme of Retha’s life.  She feels that her life has been one long blessing with the experiences she has had, the people she has met and, the spiritual force that has been with her and within her for as long as she can remember. She calls this force, this spiritual thing,  ‘Love’ and she finds it everywhere she goes and within everyone she meets.  As a young child, she always knew that she was never alone, that there was some sort of protection surrounding her.  This strong feeling has propelled her into the creative life she enjoys now.

Her studio in Stafford, Virginia is crowded with pieces in various stages of completion.  She has done commissions for the Marjorie Merriwether Post Pavilion in Washington, D.C. …colleges .... Pfizer Pharmaceuticals ........

At this point, we stopped recording and just continued to talk about our respective families and lives and our spiritual backgrounds. That weekend was a life-changing experience for us.  Warren and I had never been in the presence of two people who loved each other more, radiated spirituality, goodness, graciousness and love in every word, in every movement, in every look, in every touch.

Retha, born December 9, 1917, in Indian Territory, Oklahoma, left us on September 9, 2013.  Warren and I were blessed to be in her presence, to have known this kind, gentle, talented, lovely woman who filled the space around her with goodness, love and serenity. I think about her often and count her among the best parts of my life. 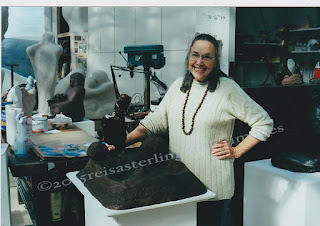 Retha Walden Gambaro, in her studio in Stafford, Virginia.
Posted by Life is more than sound bites at 9:45 PM