The Tale of the Feathers

When we took our two dogs for their walks each day, one liked to just saunter so I was the one who held her leash. The other liked to race and pull so Warren tried to keep him in check! After my beloved Warren died, it took me a few weeks for me to attempt to walk both our doggies at the same time. After a few days of trying to keep the leashes from winding around my legs, I got the hang of it. There are walkways and a park near the house so each day one of us chooses the route!

One day about a month into these walks, I found a large bird feather just outside the house on my front walk. I picked it up, put it in my pocket and went on the walk. When we came home, I absently put the feather in a small glass vase. A few days later while meandering down one of the walkways, again there was another large feather just where the doggies were stopping to sniff. I picked it up and I put it in that vase. 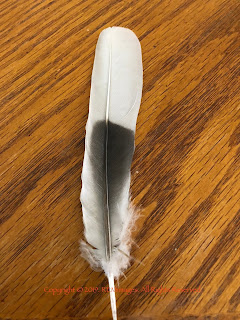 As time went on, it seems that every other time we walked, no matter which route we took, there were feathers showing up at where the doggies were stopping. Each time I picked up a feather and put it in the vase. It was kind of an absentminded thing that I did. 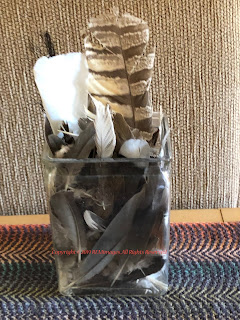 When I mentioned the feathers to friends, they all expressed the same thing. Warren was letting me know, through the feathers, that he was always with me.

I didn't find feathers every day, sometimes just one or two a week. But there was a stretch of three weeks when there were none.  Then the next day, walking down one of the walkways near the house, I came upon a bunch of feathers on the ground. As I picked them up, I started counting and there were 21 feathers! I was flabbergasted. I actually looked around as if I expected Warren to be peeking out from behind a tree! 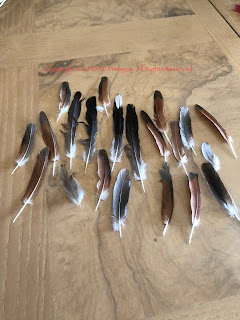 The thing about finding these feathers, no matter how much that may sound like a folk tale or as some may think -- a crutch, the idea that I think that it could be a sign from Warren, a tangible indication that he is with me, eases my heart. And the where and when of the discoveries sometime have special meaning. I have found some on my birthday, our anniversary, days when I'm having an especially hard time. I recently took a trip where I had to fly. I really dislike flying but I found a feather on the driveway as I was leaving to go to the airport. To me, it was as if he was telling me he'd be with me on the flight. 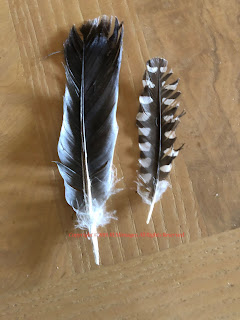 To some, the sighting of a red cardinal is a sign for them, to others it is finding pennies. Sometimes, it's music or certain scents. For me, it's the feathers. Sometimes there is no explanation for what one sees or feels that can bring a sense of comfort to a grieving heart. Call it what you will, but his spirit surrounds me, he is always with me and the feathers are an expression of his presence and I am soothed by their appearances. 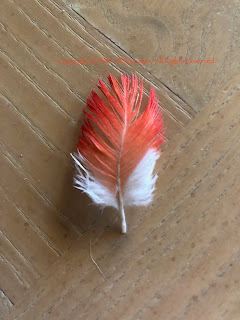 
Posted by Life is more than sound bites at 9:59 AM