Some of the things I pay or have paid for come from the government like social security and Medicare.  I paid for those things all my working life and I have a right to get those services for which I paid.  I also have paid or continue to pay for the US government to work so that ALL CITIZENS BENEFIT from the laws passed in the US Congress.   However, I'm not getting my money's worth.

I, and many tens of millions of my fellow citizens, are getting the shaft.  We are paying for wars we do not approve of, for environmental disasters occurring with regularity, for laws strangling women's rights, for laws being pushed through that favor the Christian religion over all others, for laws that restrict freedom of speech and assembly, for laws that counter the Constitution.  I and the rest of the 99% are NOT getting the roads or the infrastructure repaired, the air and water cleaned up, the research and development for eradicating diseases funded enough, the superior PUBLIC education everyone is entitled to receive, the exceptional health care seen offered in other countries but not here, the reasonable prices for medications, the assurance that all people will be treated fairly regardless of race, origin, gender, or age.  Ah, yes, I could go on but you get the idea.  There is no "liberty and justice for all," only for some as long s they are white, male, very rich and mostly Christian.

Through taxes, my money and the money from my fellow citizens (read the 99%), pays the salaries of 535 individuals who are supposed to be working for (the collective) me.  They do not.  Most of them are sick, greedy bastards who come to Washington with their hands out, ready to do the bidding of and work for the likes of the Koch brothers, Sheldon Adelson, Warren Buffet, Big Business, Big Pharma, the polluters, the sneaky, dishonorable, disreputable businesses who line pockets of Congress with bushels of money.

I'm not getting my money's worth because I'm not a gazillionaire.  The money I pay won't get me an audience with any of my congress people.  They don't listen to anyone other than those who find a way to funnel huge sums of cash into their offshore bank accounts.   So yes, I'm saying that many in Congress take bribes although they wouldn't call it that.  I would suggest that Congress has become peopled with high-priced prostitutes.  So, I write to my Senators and Legislators on all kinds of issues.  What I get back is the work of an underling who emails a stock answer that has nothing to do with what I commented on or had concerns about.  Just a nondescript "thank you" for contacting the office.

My voice is not being heard because I don't have the money to buy anyone in Congress.  I would bet that the majority of people who run for seats in Congress start out with decent intentions but it doesn't take long before the bigger picture standing in front of them is that of a bulging bank account which gets bigger the longer they manage to keep their Congressional seats.

And then there is the partisanship of politics.  When did compromise become a dirty word? Sane intelligent people who have differences of opinion usually discuss, consider, examine, reason and explore solutions that will benefit as many people as possible without kicking an opposite view down a hellhole.  And doing so without resorting to lying, bribery, stupidity, denying established facts or being influenced by money-grubbing corporations, businesses or individuals who want special privileges or special laws made for just them.

Democracy is supposed to be government with power vested in the people. We keep electing people who have lost sight of that. What we have is not democracy anymore.  We have a plutocracy with government power invested in the few, the 1%, the ones with the multitudes of money, the gazillionaires who want more money, power and act as if this country belongs to them personally. This country has become ruled by the wealthy.  Which one of the Kochs will claim to be THE KING when the GOP/TP get their way?  Will they fight over the crown?  Will Sheldon Adelson muscle his way in with his corpulent, elephantine body and claim the throne?

So, the Preamble to the Constitution starts with, We the People of the United States.  That is no longer true.  I ask:  We the who?  The answer now is: We the Corporations.  We the rich, white, privileged .....

We are the laughing stock of the world.  Will there be another revolution?  Perhaps there will come a time when the 99% will be so fed up with being treated like second-class citizens or worse that they will be willing to take that stand against the mostly Republican greedy bastards who have destroyed what the United States is supposed to be.  And just to make it abundantly clear:  THIS IS NOT PRESIDENT OBAMA'S FAULT.  I lay the fault at the feet of the GOP and their particularly stupid friends from the Tea Party.  They are a war-mongering, illiterate, lying, intellectually-deficent bunch of religious fanatics who are happily led around by the rings in their noses as long as the money keeps flowing.  I hope someday soon they'll fall into that hellhole they've dug for everyone else.

A caveat:  I do have some wonderfully bright GOP friends who ARE NOT part of the group I have assailed above.

(Thanks to Politics USA for the meme.) 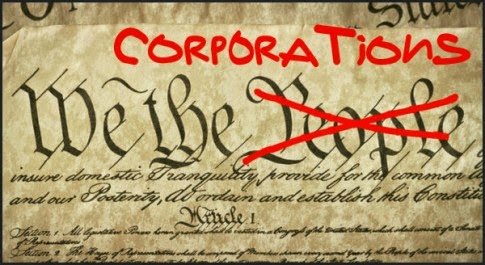 Posted by Life is more than sound bites at 2:40 PM