Our doggies feel his absence, too.

We moved to Arizona with Snuggles, our little, adorable rescue pup. Five months later we added another rescue pup, Sterling, because we thought Snuggles should have a friend to grow up with. They both are about the same age.

Sterling became very attached to my husband and the two were just about inseparable. So, during his illness, Sterling knew something was wrong. He'd sit on his lap and put his paws on the affected area and he would just stare into Warren's eyes.

During the last several weeks, it's been sad watching the doggies look for him.  They go to the rooms where he spent some of his time and look around almost every day.  They sleep on his side of the bed. I placed a towel that he had used (and I didn't wash) on his pillow and the doggies sleep on it. Sterling now follows me everywhere I go, even if it's just a change of a few feet. When I leave the house, he barks and cries and Snuggles just looks at me with a very concerned look on her face. I tell them that I'll be back and that sometimes seems to calm them down.

For the first several weeks, Sterling exhibited definite signs of depression. He wouldn't eat, he would just sit with his head drooping, he would sigh as he lay on the sofa. Snuggles sighs quite loudly and her eyes follow me as I go about the house. When I'm at my computer, she's right at my elbow, always. And so I've lavished an enormous amount of cuddling, hugging, kissing and just loving both of them. Even when my son's dog comes over he knows someone is missing. He, too keeps looking for him.

The looks on the doggies faces have changed. There is a sadness in their eyes, especially when they look at me when I'm having one of my meltdown episodes and when we settle in bed at night.  They crawl right up to my face and stare... I think just to make sure I'm all right.  I cuddle with them, hug them, stroke their heads and tell them I love them.  Doing that makes me feel better and they seem to love that.

I'm thankful that I have them. They provide a lot of love and emotional support and comfort. I hope I do the same for them. 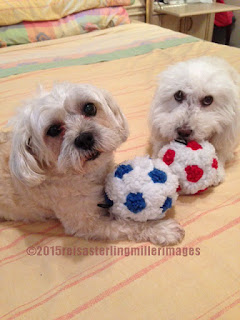 Posted by Life is more than sound bites at 3:57 PM

Email ThisBlogThis!Share to TwitterShare to FacebookShare to Pinterest
Labels: the doggies